Pacific Bluefin Tuna: On the brink or the rebound?

Bluefin tuna are one of seven tuna species caught in both the commercial and sport fishing world. They are the largest tuna species on the planet and can grow to weigh more than a half ton and live up to a half century. These fish have territories throughout the world’s oceans and are categorized into three subspecies (Atlantic, Pacific and Southern) based on the oceans and regions they inhabit. 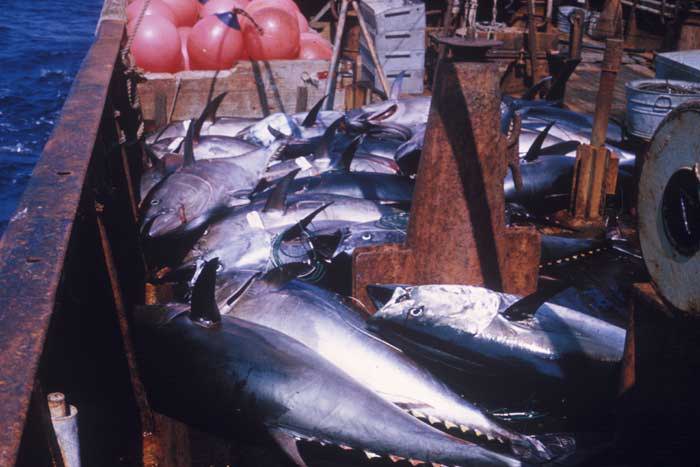 Bluefin tuna taken from subsurface waters with longline gear during exploratory fishing by the BCF vessel DELAWARE. Although explorations showed this species to be commercially abundant seasonally during the summer and fall in the Northwest Atlantic, an intensive commercial fishery has yet to be developed. Credit NOAA Historic Fish Collection

While these fish are heralded for their impressive size and prowess as a hunter, their population numbers and concerns about their viability has been called into question. Atlantic Bluefin has been on and off the endangered list since 2010. As recently as 2017, The National Oceanic and Atmospheric association claims that Atlantic Bluefin populations are not being overfished due to strictly enforced harvest limitations. The case for Pacific Bluefin however is not so black and white. Unfortunately, it seems that the world’s obsession with outrageously high market prices for a single fish and unwillingness to shift focus has overshadowed a species struggling to rebound.

Tuna has been a staple in the diet of eastern cultures for centuries. The Japanese are the world’s largest consumer of Bluefin Tuna accounting for approximately 80% of total world consumption. There is currently a great deal of concern surrounding commercial harvesting practices. Industrial fishing companies use large nets and most pacific blue fin caught do not reach sexual maturity which usually occurs around 5 years of age.

Bluefin are a migratory fish capable of swimming long distances. The Sea of Japan is a spawning ground for these fish and after covering bouncing around the Pacific Ocean over the course of their lives, they return to spawn. This has traditionally made catching these fish easy for the Japanese people however smaller fishing operations have voiced concerns and provided anecdotal evidence of significantly decreased catches within the last decade.

Pacific Bluefin population levels according to the experts

The ISC’s (International Scientific Committee for Tuna) 2018 stock assessment claims that although stocks are well below target levels, populations are expected to rebound to sustainable levels by 2024 due to reduced catch limitations enforced by nations bordering the Pacific Rim.

What’s important to note from the ISC’s report is that data has only been collected since the mid 1900’s. Historical evidence of Tuna fishing in the Japanese culture dates back to 5500 B.C. which creates a large time gap in which population numbers were unknown.

Fishing methods of catching Pacific Bluefin are Seine nets, long lines, trolling, poll and line and set net. Seine nets are large nets than can be cinched to form a closed purse or bag (A good example can be seen here). Purse Seine nets are the most common method employed for tuna fishing while long line and trolling are second and third.

Smaller tuna fishing operations typically use pole and line gear. This has been popularized in pop culture by shows like Battlefish – a Netflix show that follows local fisherman in their pursuit of albacore tuna off the Oregon coast.

Tuna is the most expensive fish on earth. In the last decade, Japan has made headlines for the high prices fetched by large Pacific Bluefin. Below is a chronological list of astronomically high prices paid over the last decade by attendees of Japan’s inaugural fish market for a single fish. 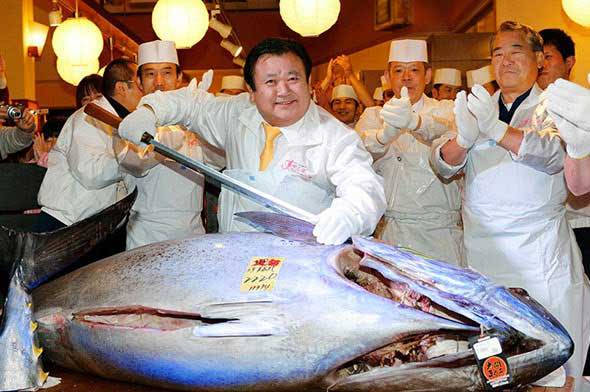 The basic economics of the scenario above might indicate that because market tuna prices trend upwards over the course of a decade that there is an increasing demand for a stagnant supply of fish. Well, it seems to be a little bit of both.

The population of pacific Bluefin tuna has steadily decreased over the last 20 years while the population of Japan and the world has risen. Tuna stocks can be hard to measure because they are migratory fish however we know from studies and anecdotal evidence that catch numbers have dried up in recent years.

It is also important to consider that the buyer of at least three of the high priced tuna above is none other than Kiyoshi Kimura, a high profile sushi restaurateur in Kyoto Japan also known as the “Tuna King”. Tuna with high price tags are usually sold at the first market auction in January and seem to a bit of a public celebration of nationalism and over-excitement for the upcoming fishing season.

Two promising endeavors to save dwindling pacific Bluefin populations are aquacultured or farmed tuna and unity and enforcement of tuna catch. Governing bodies that oversee tuna fisheries have already been tightening catch numbers and cracking down on offenders but the rules are still getting broken. 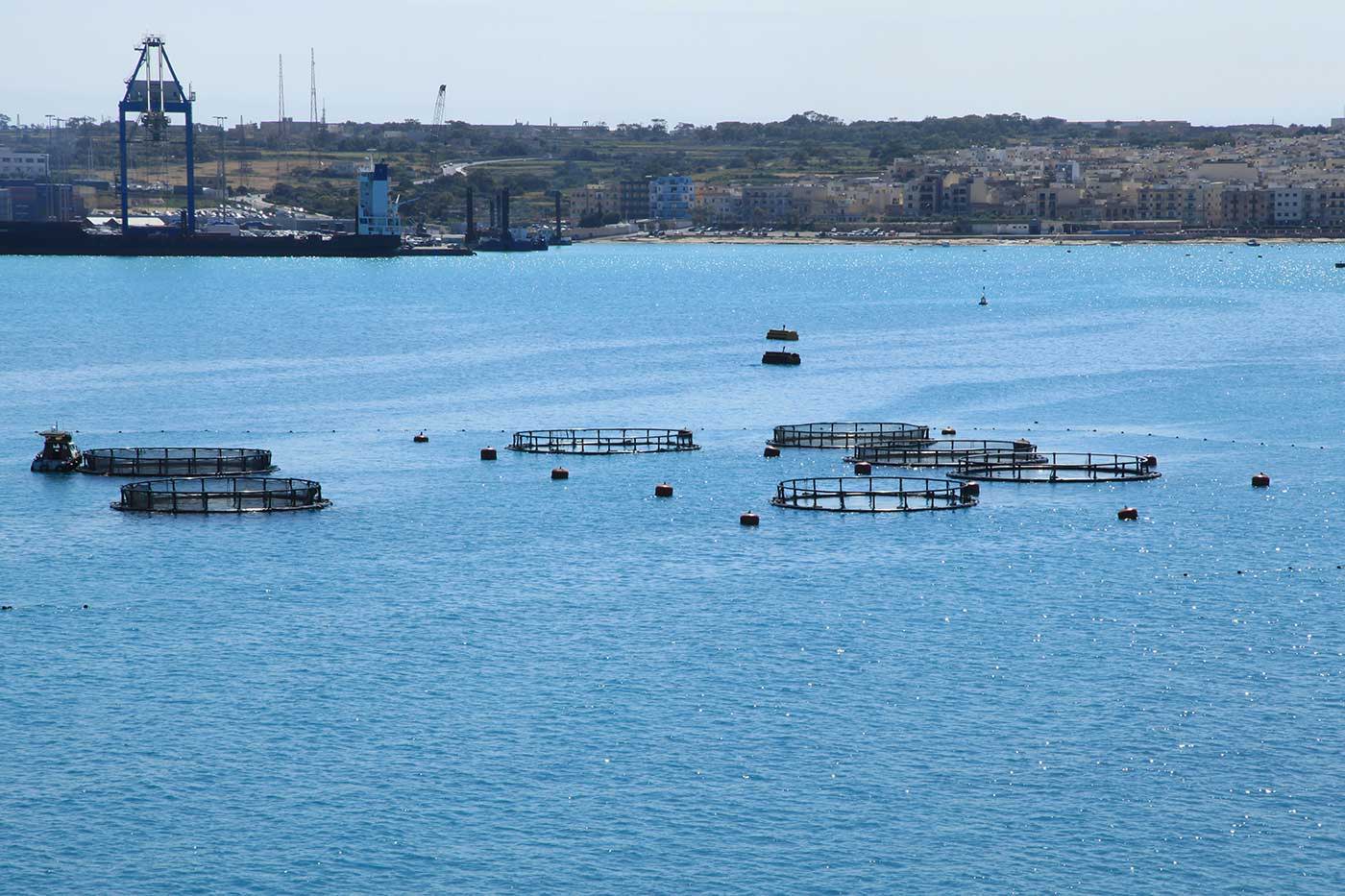 Japan’s illegal fishing market is purported to be upwards of 20 million tons a year. Meanwhile, the Pacific Bluefin Tuna stocks in japans bordering oceans are down and the demand for the fish has stayed constant.

While the migratory patterns of Pacific Bluefin tuna make population estimates difficult, there is no doubt that stocks have significantly decreased to potentially non-sustainable levels. Based on pricing markers and continued global demand for sushi and sashimi, all Bluefin species face the risk of significantly diminished numbers and overfishing. Continued viability of the species will be highly dependent monitored fishery regulations and the ability to reproduce sustainable populations in controlled environments.