Why Coral Reefs are more important than you might think

When most people think of a coral reef it’s usually accompanied by an umbrella drink, lounge chair, crystal clear blue water and a week in the Caribbean. Yes. .they make for great desktop computer backgrounds but these living colonies serve a greater purpose than you might think.

To understand how important coral it’s necessary to start with a basic understand of what coral is. Corals are marine invertebrates made up of individual polyps that grow together in colonies. There are two types of coral – hard coral and soft coral. Hard corals are attributed to reef building by secreting calcium carbonate.

The corals secretion of calcium carbonate forms a hard exoskeleton which can take a variety of shapes. Producing that exoskeleton is a slow process powered by a symbiotic relationship with algae in the water column. The algae use sunlight for photosynthesis and this in turn powers the production of calcium carbonate. This is why most coral reefs are found in shallower water where the suns penetration is strongest.

The Importance of Corals to ocean life

Coral reefs are home to 25% of all marine species (1). This might be surprising considering the scale of the ocean compared to the total coral reef footprint on the ocean floor. Just looking at the amount of biodiversity in a reef is a great way to gauge its health. More life means a healthy reef

As a reef grows and produces coral structure they become home to small marine inhabitants that use the reef for a variety of reasons. This is where the food chain comes in to play. The food web (or food chain as it may be more commonly known) as it pertains to coral reefs is a system of producers and consumers. The producers at the lowest level are organisms that produce their own nutrition. Consumers are larger organisms and predators that prey on smaller species. And so it goes all the way up to the top of the food chain.

It’s because of this system that coral is important to all marine life. Naturally without prey predators will disappear. Reef systems are delicate and an interruption to the food chain can cause cascading impacts with dire consequences to the sustainability of many marine species.

The Importance of Corals to human life

It is estimated that 80% of the world’s population lives within 60 miles of the coastline. The human race’s relationship with sea has been well documented throughout history and many small towns and villages still rely primarily on the ocean as their primary food source. One square kilometer of reef can feed approximately 300 people and nearly 10% of all fish eaten are caught on a reef (1).

Coral reefs provide an array of economic benefits and help support some industries entirely. Much of the Scuba diving and snorkeling tourism centers around reef exploration and viewing. Many popular and delicious fish are found on coral reefs which attracts sport fisherman and spearfishing. There are also some not so obvious industries that rely on coral reefs. For example the marine aquarium industry sources a vast majority of aquarium fish and many other marine species from coral reefs. All together coral reefs generate around 30 billion dollars in economic benefits annually (1).

The economic benefits aren’t just limited to leisure activities. According to Coral.org “Scientists have developed treatments for cardiovascular diseases, ulcers, leukemia, lymphoma, and skin cancer, all from chemicals in reef plants and animals. Other compounds reduce inflammation, kill viruses, and relax muscles.” The chemical compounds in various corals have been used to treat everything from HIV to sexual disorders.

If that weren’t enough, corals also play an important role in protecting the marine and coastal environment. Reefs prevent beach erosion by slowing wind driven waves as they reach the coastline. Along with reducing beach erosion, Coral reefs also impact the cleanliness of nearby beaches by acting as a filtration system for small particulates as they move towards the shore.

Preserving coral reefs isn’t limited to aesthetic reasons. . .these living organisms have widespread importance to many facets of human life across a diversity of economic levels.

Threats to the existence of Coral

Corals reefs are currently experiencing widespread die off due to warming ocean temperatures. Depending on whom you ask the cause of this may be man-made or natural. .however the fact that ocean temperatures have risen remains. When ocean temperature rises the symbiotic relationship with the algae that powers their growth is disturbed. Warmer waters trigger excessive photosynthesis in the algae, called zooxanthellae, causing the coral to reject the algae. This is called decalcification or “coral bleaching”.

Some research suggests there is a silver lining though. According to a recent study published on Nature Climate Change Coral reefs may have the ability to adapt to warming ocean waters. The study examines two consecutive bleaching events and noted that the second bleaching event in a localized area did not have as severe an effect as the first. This is encouraging news considering the amount of coral die off at the great barrier reef. The study did find, however, that not all corals are as resistant to warming temperatures as others. 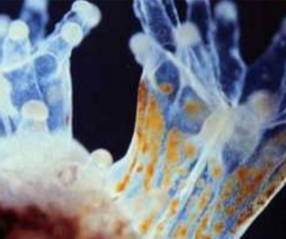 What you can do

If you’re scuba diving or snorkeling on the reef don’t move or touch the coral. Touching coral can disturb the coral membrane and result in death of the coral. This is important in a localized context but there are other macro environmental things you can do if you’re not in the water. Below are some personal actions you can take to directly or indirectly support coral reefs.

Reborn Rubber (shameless plug) – We make a slim wallet from used wetsuits (always cleaned and decontaminated first). We also use polyester made from recycled plastic bottles. 10% of you purchase will go towards ocean cleanup. Its thin, durable and zero impact. A cool gift for divers and surfers.

4Ocean – These guys sell a bracelet. For every bracelet purchased they will remove 1 pound of trash from the ocean. They have removed over 1 million pounds of trash since the company was started a in 2017.

SandCloud – The Company was started selling towels but has expanded to other products. They donate 10% of the purchase to ocean cleanup.

Saltwater Tribe – Same concept as SandCloud. The founder is a diver and the company sells “ocean inspired” gifts. They donate 10% of their profits as well.

Some other notable mentions

Bureo – A pretty cool skateboard made from recycled plastic

IndoSole – footwear made from used tires

The aim of Eco tourism is to attract travelers to locations to raise awareness for a variety of environmental reasons and support local economies. Critics would say that most travel is a net negative impact environmentally. The wiki page is a good primer as it differentiates what a true definition of Eco-tourism is versus what the travel industry sells it as.

Buy a single use water bottle

Last year Americans used 50 billion plastic single use water bottles. That is a staggering number and concerning when you think about where many of those bottles end up. Buying a single use water bottle is an easy way to reduce your carbon foot print. Hydroflask, Yeti and 4ocean are some great places to start.

You may remember seeing the great Atlantic garbage patch in the news recently. This really spiked awareness and brought attention to the progressive damage being done to the ocean by pollution. The oceans and the marine species that inhabit them need support and innovative ideas being implemented by the organizations below. Donating to them not only supports healthy coral systems but effects positive change in ocean cleanup.